The Spiritual Art Of Scaffolding

The Spiritual Art Of Scaffolding 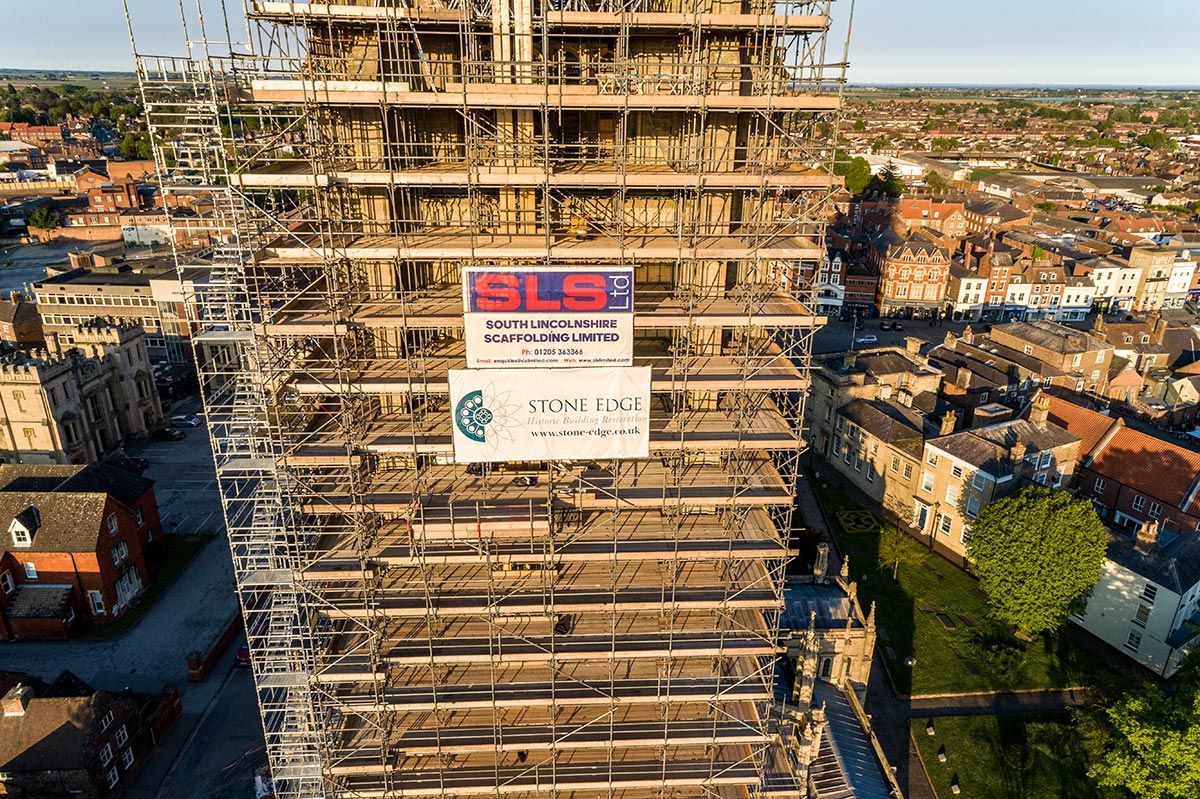 Charismatic St Botolph’s Church in Boston – also known as the ‘Boston Stump’ – looks pretty spectacular at any time of year, especially from the air. It’s persona however, takes on a different yet fascinating front when lovingly wrapped in scaffolding. But this isn’t any old scaffolding. This is brilliantly designed modern access – created especially for a wonderfully historic construction, not only to keep it safe but also to aid vital restoration work.

The team at Creator Scaffold Designs, based in Rotherham, was responsible for coming up with an ideal system to keep both workers on-site and this magnificent building completely

safe. Every lift on the scaffold is fully boarded, and rises up 80m to the top lift, it makes for a fascinating vista.

SLS Scaffolding Contracts Manager James Brown explained: “The project began for us in April 2017, when our Contracts Director and myself were asked to advise on access solutions for the original architect. From there we suggested our preferred scaffold designers ‘Creator Ltd’. They were asked to produce a set of working drawings for all scaffolds needed. We were lucky enough to win the contract late on in November 2018.

A ground scan was completed prior to work commencing showing areas of possible voids. The solution was to bridge the voids using steel joists both provided and fitted ourselves by the company. On-site work began in early December of last year.

One of the main challenges during the project was the lifting of materials. This was done in two ways. Firstly we used a traditional rope and gin wheel to manually lift materials, and secondly, a mechanical hoist within a purpose-built hoisting bay.

Using the hoist meant we could reduce the number of operatives on site. The number did vary during the project but there were mainly six operatives during the higher phases, with less during the basing out phases. We built ourselves a purpose-built loading bay at the foot of the scaffold where materials were lifted in place using a Hiab crane mounted lorry. The loading bay was another addition made by ourselves to the original design and this was encased by a five metre high steel hoarding for protection and security.

SLS opted to use a traditional tube and fitting scaffold for the project which is 21m wide at the base, rising up 10 lifts to the first drop off where it becomes 15m wide for the next 20 lifts. Those remaining up to lift 38 are around 8m wide with a couple of no return splays at both sides. The internal protection deck is situated within the tower built out of a 200mm walkway using x-beams. This scaffold is approx. 28m above a café area closed during the temporary scaffold works.

James added: The internal lantern scaffold is situated above the belfry roof. This posed some design problems as the roof would not withstand the 8m x 8m x 11 lift scaffold needed to access the lantern roof and walls.

The original solution was to build out of the belfry, through the belfry roof and up to the lantern roof. After taking the contract we were asked if there was a method of scaffolding the lantern without altering the belfry roof enabling water tightness throughout the project.

Our solution was to bridge the belfry from the external scaffold through the lantern windows down to the east elevation viewing platform some 8m below. This meant we would build a 20 wide four lift scaffold tower to catch the opposite end of beams – to tie the tower through louvres into the belfry. Creator Ltd was consulted on the method and new drawings were made to incorporate this.

We completed works on the 5th of April, including the external scaffold to the top of the church, an internal protection deck and a scaffold within the church lantern.

The whole project lead in conjunction with James Brown by scaffold supervisor Simon Wilkinson was erected without damage to the external façade with no bolt holes or ties, or even any windows removed. Instead, the original putlog holes were utilised, and where this wasn’t possible reveal type ties were used.

James told us: We would like to thank and acknowledge Creator Scaffold design Ltd, for their help and co-operation throughout the project, we feel we have a strong relationship with them and look forward to working with them in the future. We’d also like to thank Stone Edge Ltd, especially their on-site manager Stuart Furnival for their first-class assistance.